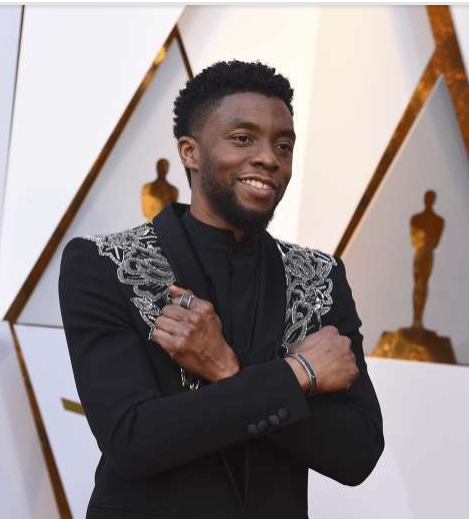 © Provided by Associated Press FILE – In this March 4, 2018 file photo, Chadwick Boseman arrives at the Oscars at the Dolby Theatre in Los Angeles. Actor. Can we lose [our] people with the most courage? Is the courage and understanding of our evolution in American history rare as it is capable of characterizing our unique and vitally important “experience” that validates the American creed (Declaration of Independence and Preamble of the U.S. Constitution) ? Don’t be “Bamboozled”.

Chadwick Boseman, who played Black icons Jackie Robinson and James Brown before finding fame as the regal Black Panther in the Marvel cinematic universe, has died of cancer. His representative says Boseman died Friday, Aug. 28, 2020 in Los Angeles after a four-year battle with colon cancer. He was 43. (Photo by Jordan Strauss/Invision/AP)

According to the Associated Press… As his Hollywood career boomed, though, Boseman was privately undergoing “countless surgeries and chemotherapy” to battle colon cancer, his family said in a statement announcing his death at age 43 on Friday. He’d been diagnosed at stage 3 in 2016 but never spoke publicly about it.

The cancer was there when his character T’Challa visited the ancestors’ “astral plane” in poignant scenes from the Oscar-nominated “Black Panther,” there when he first became a producer on the action thriller “21 Bridges,” and there last summer when he shot an adaptation of a play by his hero August Wilson. It was there when he played a radical Black leader — seen only in flashbacks and visions — whose death is mourned by Vietnam War comrades-in-arms in Spike Lee’s “Da 5 Bloods.”

“A true fighter, Chadwick persevered through it all, and brought you many of the films you have come to love so much,” his family said. “It was the honor of his career to bring King T’Challa to life in Black Panther.” Boseman died at his home in the Los Angeles area with his wife and family by his side, his publicist Nicki Fioravante told The Associated Press.

Boseman is survived by his wife and a parent and had no children, Fioravante said.

Born and raised in South Carolina, where he played Little League baseball and AAU basketball, Boseman graduated from Howard University in Washington, D.C. He wrote plays, acted and directed in theater and had small roles in television before landing his breakthrough role.

Yamiche Alcindor, said “We witnessed strength and honor, Chadwick Boseman shot legendary movie after legendary while fighting for his life. What a real life superhero.”-

Please contribute to the #OnlineMonumentChadwickBoseman on Twitter and use the Hashtag

Terrence Howard on Colorectal Cancer – Advocate Because He Lost His Mom