Shirley Caesar’s New Song “Take Your Knee Off My Neck” 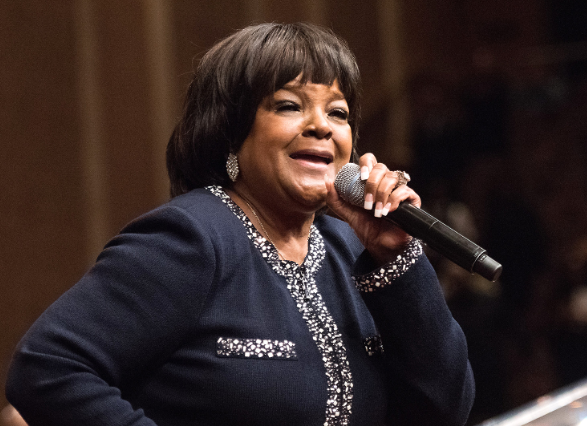 Pastor Shirley Caesar is also known as “The First Lady of Gospel Music.” She is a steadfast supporter of educational initiatives in Wilson County and has served as the principal talent judge for the Wilson Idol Talent Showcase for at least three prior years. Pastor Caesar is a  Raleigh resident with multiple awards as vocal artist. She has earned twelve Grammy Awards, eighteen Dove Awards, 14 Stellar Awards and her own Star plaque in Hollywood, California on the “Walk Of  Fame”.

Gospel is cultural from a music-hearted people. It has historically told our folklore, spiritual understanding, plight, inspirations from African expressions to hip hop in our worldviews. Today there a few masks on prevailing attitudes. Every culture has its own music and songs. I think Marion Anderson and Mahalia Jackson would say Amen to Shirley Caesar.

There was an authentic 2020 March reminiscent of 1963 at the Washington Mall this month, and countless heartfelt Peaceful Protests in Major Cities this year. Outside Anarchists have vandalized properties and murdered people spreading their vitriol anonymously, Looters and Opportunist from Gangs and the Hood have stolen things, and Russian and Other Cyber-Enemies have sown unprecedented division in coordination with White Supremacist, and local authorities have had final verdicts of “justifiable homicide”. Black People are not at war with “community policing”. Community Policing is supposed to be “in-line” with President Obama’s 21st Century Policing

Gospel Music is about “praise song and human correction. It has the tradition of spiritually telling stories of celebration and the hand of God working on good and evil in the world. Gospel describes principled character(s) of right living, and also spiritual arguments that try the souls of “human-kind”.

The Love Commandment is to Love Thy God with all thy Mind, Heart and Spirit and Love Thy Neighbor as Thyself’. Pastor and Gospel Singer Shirley Caesar is an historic Matriarch for African Americans today like a Coretta Scott King and a Maya Angelou in my way of thinking. I think that it is wicked for all of us not to solve things recognizable, doable and outlined by two diverse presidents. The People Stand Beyond The Elected Because We Inherit Civil Liberties or Chaos.

It is said that we will “come to know the truth and the truth will set us free.” We can not be double-minded about the Declaration of Independence or the Preamble of the Constitution before we compare notes on pluralistic community policing or definitions and consensus on public safety.

Let if you will, “the Church Say, AMEN!”